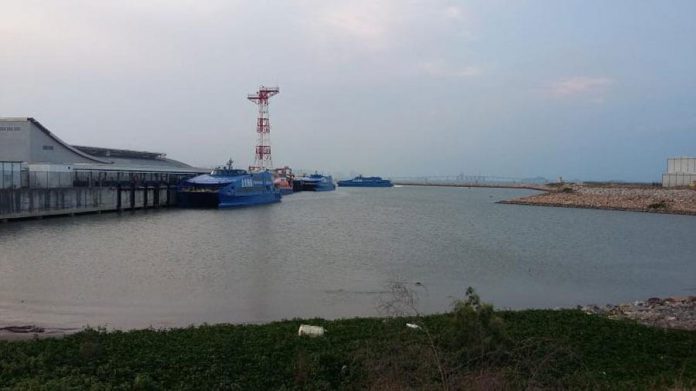 Military officials have surveyed Bali Hai Pier as part of feasibility study for ferry services between Pattaya, Cha-Am and Hua Hin, finding both the jetty and harbour in need of improvements.

Air Chief Marshall Wijit Jitpakdee, chief of economic cooperation for the National Council for Peace and Order, has led the delegation of military and local officials to the South Pattaya pier for a survey of its suitability as the eastern base for the 4 billion THB ferry project. The NCPO ordered the Marine Department in April to have its 30-million THB feasibility study complete by the middle of 2016 with hopes of having the cross-gulf ferry go into operation by 2019.

Military and government officials are assembling a feasibility study to determine whether Bali Hai Pier would be a suitable eastern base for a cross-gulf ferry service. The project is aimed at boosting tourism, the economy and trade between the two coastal areas and shorten travel time to three hours from the current six or seven. Bali Hai is one of five piers being considered for the eastern terminus of the ferry service, along with Ocean Marina in Sattahip’s Najomtien Subdistrict, the Royal Thai Navy’s Juksamet Pier in Sattahip, Laem Chabang Port and Koh Loy Pier in Sriracha.

Transport Minister Prajin Junthong said in April that Bali Hai, Ocean Marina and Laem Chabang were considered the most-suitable locations. Wijit was told, however, that Bali Hai would need upgrades before it could be used for a commercial ferry operation envisioned to handle at least three million passengers and 220,000 vehicles per year. During his presentation, Pattaya Mayor Itthiphol Kunplome told the Air Chief Marshal that the pier, which went into service about a decade ago, is in need of repairs, particularly its dilapidated bridge. The city has requested a budget of 55 million THB for maintenance.

More significantly, water in the harbour is only two metres at its deepest, while a ferry would require three metres of water. Significant dredging would be required, he said. Finally, the mayor said, Bali Hai needs additional parking and transportation links to the main arteries into the city. All those involved said the operation must proceed carefully and suitably in the areas of budget and benefits.

The military officials planned to take all the data from their survey and the city presentation and present it to the NCPO and Marine Department to incorporate into the feasibility study. Prajin said in April that the first two years of the project’s development, running through 2018, would see investment mostly in acquiring or building ferries, terminals and docks.

To date there has been little comment about pier options and requirements at the western (Hua Hin/Cha-Am) side of the gulf. Siam Eastern Logistics Terminal Co. has proposed a four-year investment plan, starting next year, which the government is considering. Initial specifications call for ferries to be 250-ton catamarans able to carry 280 passengers and more than 30 vehicles. It would travel at 18 knots. The trip to Hua Hin would be cut from the 6-7 hours needed to travel 345 kilometres by road to 2.5-3 hours over 105 km by sea. It is estimated the ferry would generate four billion THB in revenue a year. Deputy Mayor Ronakit Ekasingh said the ferry plan is a good opportunity that creates value for the economy and tourism industry.