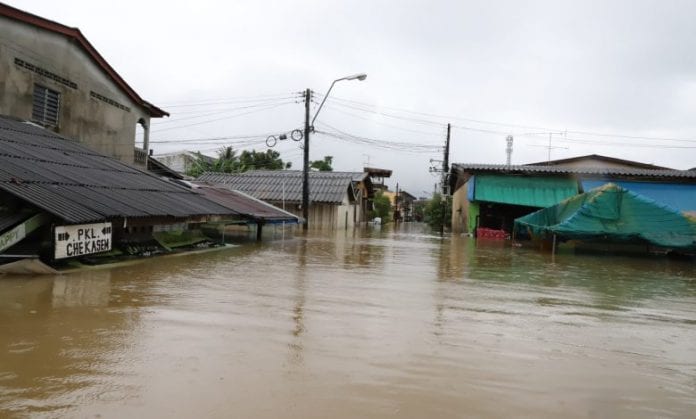 The three hardest-hit districts combined with the other affected district of Ra Ngae saw total of 8,130 households or 20,792 residents affected by the flooding, he said.

It is now feared that Typhoon Kammuri, which will make landfall in the Philippines on Monday night or early Tuesday morning and has prompted the evacuation of 1,000 families at Luzon Island, could make a bad situation in Narathiwat even worse.

The flooding in Sungai Kolok, Sukhirin and Sungai Padi stemmed from heavy rain due to the northeast monsoon over the region, with the Sungai Kolok and Bang Nara rivers bursting their banks and adding to the misery. Eight roads were also flooded.

The maximum rainfall on Sunday was recorded at 353.4 millimeters in Sungai Kolok followed by Waeng (281.6 millimeters) and Joh I-Rong (276 millimeters), Ekkarat said.

A total of 123 residents living on low-lying land in five communities in Sungai Kolok were evacuated to a local school and could remain there for a few more days as more rain is forecast, according to the provincial governor.

The Narathiwat flood and landslide disaster commander centre has dispatched flat-bottom boats, along with a number of life vests and drinking water to the four flood-hit districts while the Princess Pa Foundation, Thai Red Cross Society, sent 6,000 flood-relief bags and the Disaster Prevention and Mitigation Department gave 2,000 flood-relief bags and a drinking-water-producing unit with a 10,000-bottle capacity, the latter a welcome addition to the province’s existing unit.