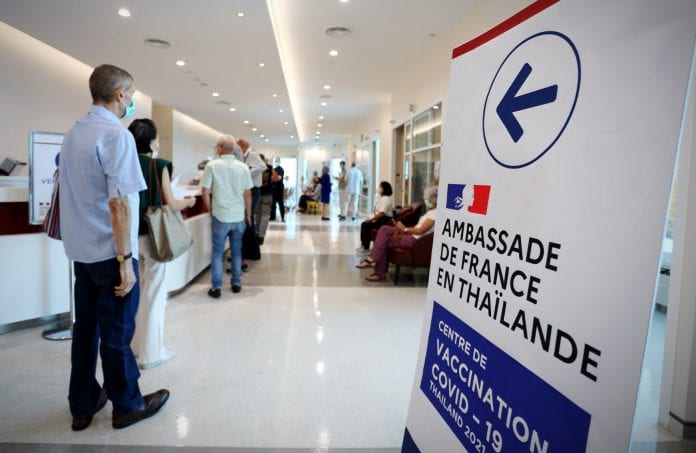 Less than one week after the French Embassy in Bangkok announced plans to vaccinate its nationals aged over 55 in Thailand, French expats began receiving the vaccine on Saturday (June 27).

The French Ambassador, Mr. Thierry Mathou, who described the vaccination campaign implemented by the embassy as “unprecedented”, was on hand to inspect the proceedings.

The vaccination campaign of French nationals in Thailand aged 55 and over was only announced on Monday (June 21) and now the first of those vaccinations have already been administered.

In the original announcement, Mr Mathou said the vaccine given will be the single dose Johnson & Johnson vaccine, which has been approved for use in Thailand.

As well as in Bangkok, the French Embassy has said it will also set up vaccination centres at Bangkok Hospitals in Pattaya, Hua Hin, Ko Samui, Phuket, Chiang Mai, Khon Kaen, and Udon Thani.

The vaccines are administered free of charge.

More vaccinations are due to take place today (June 27), the embassy said.

Eligible French nationals can register for the vaccine here.

The news come as the United States last week confirmed it would not be vaccinating its citizens in Thailand.

The United Kingdom and Australian have also said there are no plans to vaccinate its citizens in Thailand.