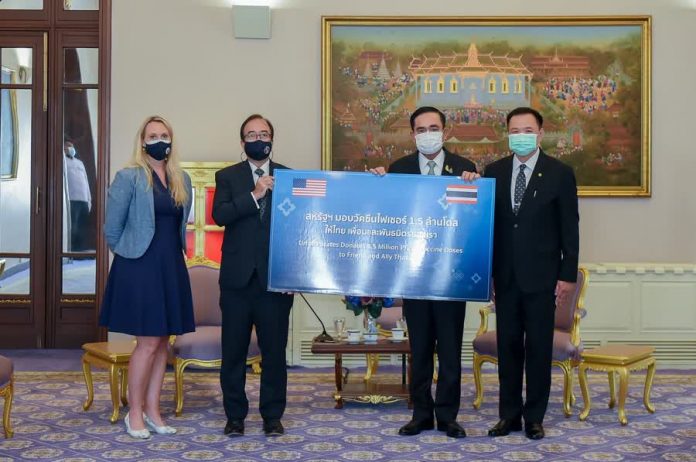 BANGKOK (NNT) – Prime Minister and Defense Minister General Prayut Chan-o-cha, has presided over the handover ceremony of COVID-19 vaccines given by the United States of America to Thailand. Attending the ceremony was Mr. Michael Heath, Charge d’ Affaires, at the Embassy of the United States of America in Bangkok, as the representative of the U.S. Government. Government Spokesperson Anucha Burapachaisri disclosed the nature of the meeting as follows:

The Prime Minister thanked the U.S. Government for the donation of COVID-19 vaccines, which reflects over 188 years of tight knit relations and friendship between the two countries. It also underscores the commitment of both Governments to join forces in tackling the COVID-19 situation. The donated vaccines will be useful for Thailand in its endeavor to control the spread of the COVID-19 pandemic. He also thanked U.S. Senator Tammy Duckworth and all concerned agencies for advancing the provision of an additional 1 million doses of vaccine, and to the U.S. Government for taking good care of Thai citizens and businesses. The Prime Minister confirmed that the Government would properly administer and allocate the vaccines to ensure the utmost benefit to the Thai people.

The Charge d’ Affaires, a.i. of the U.S. Embassy in Bangkok expressed his pleasure, on behalf of the U.S. Government, to hand over the COVID-19 vaccine (Pfizer) to the Thai Government, and to be part of the country’s effort to curb the spread of the disease. Thailand and the U.S. have enjoyed long-standing cooperation in all areas, including public health issues, which will be further enhanced by the donation of vaccine today.

The Charge d’ Affaires, a.i. of the U.S. Embassy in Bangkok also expressed appreciation of the Thai Government’s Ministry of Foreign Affairs, and Ministry of Public Health for taking good care of the U.S. citizens in the country during the pandemic, and expressed a hope that the COVID-19 situation in Thailand would soon ease.