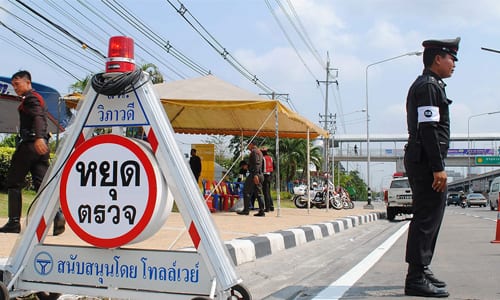 Police will set up checkpoints for DUI – driving under the influence – that involves alcohol tests via breathalyser in some provinces including Bangkok starting April 1, deputy National Police chief Pol General Damrongsak Kittiprapas said on Tuesday.

“To ensure transparent operations by officers at these checkpoints, police have started installing CCTV cameras at the points as well as body cameras on officers to record their interaction with road users,” Damrongsak said.

“Checkpoints in some provinces are now ready to operate again, such as in Bangkok, Ubon Ratchathani and Nakhon Ratchasima,” he said.

“We want to start opening these checkpoints as early as April 1, as the Songkran festival is approaching and a high volume of traffic is expected. Having these DUI checkpoints will greatly help reduce road accidents caused by drunk driving.

”The checkpoints will sport a sign informing road users that CCTV cameras are installed, as well as the telephone number of the commanding officer in that area in case anyone wants to file a complaint.

“Besides installing CCTV cameras, we have established the TPCC [Traffic Police Checkpoint Control] database to list all checkpoints in the areas to reduce an overlap,” Damrongsak added.

“Commanding officers can use this database to easily check if there is any unauthorised checkpoints in their areas.”