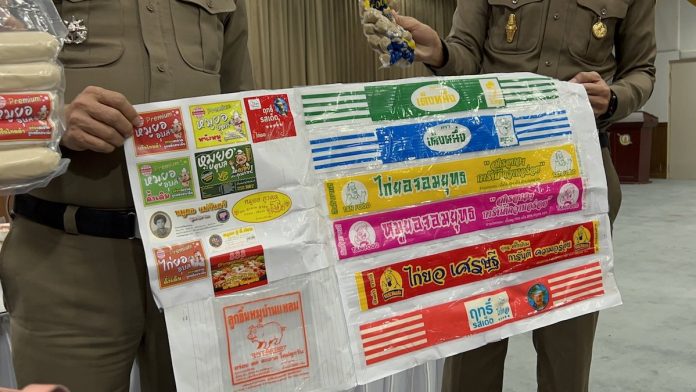 Police have issued a warning after children in Phetchaburi and four other provinces developed a serious blood disorder after eating toxic sausages.

On Thursday (Jan 3), officers from the Consumer Protection Police Division (CPPD) carried out a raid at a sausage and meat processing factory in Chonburi, thought to be the source of the contaminated products.

Officers seized products believed to be worth in the region of 700,000 baht.

The raid took place after nine children in Chiang Mai, Kanchanaburi, Saraburi, Trang and Phetchaburi, were admitted to hospital after eating sausages. The children were diagnosed with methemoglobinemia, a blood disorder that is caused by increased levels of haemoglobin.

Police, with assistance from officials from the Food and Drug Administration, were able to ascertain the products came from the same factory in Chonburi.

During the raid carried out on Thursday, the owner of the factory said she had been producing sausages for about five years and had been doing so despite not having the proper permits.

Police said they found labels in the factory that matched those from the sausages eaten by the children who fell ill.

None of the products had FDA approval, police said.

The factory produces a total of 32 different products, some of which displayed fake halal certificates. Following the raid, police arrested the owner and closed the factory.

The owner faces a multitude of charges that could result in a jail term of between 6 months and 10 years, as well as fines of between 5,000 baht and 100,000 baht.

Police urged the public to inspect products before consumption to ensure they are of good quality. Food production facilities were also warned that they must ensure food safety and hygiene practices are followed in accordance with the law. Those who fail to do so face arrest and prosecution, police warned.