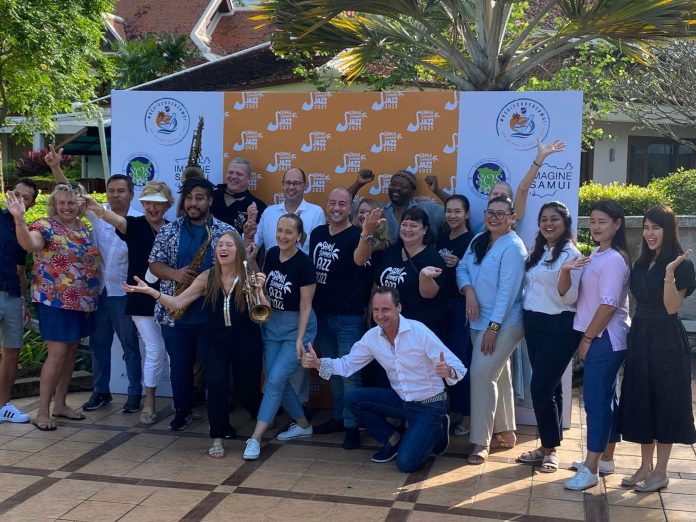 In early November I was invited by SKAL Samui, the largest of the six SKAL clubs in Thailand, to visit the beautiful island at the end of the month where they were announcing the dates for the ‘Samui Summer Jazz Festival’ from May 2 to next year.

They had invited Alexander Beets, Saskia Laroo and members of their bands from the Netherlands to announce the event and give a quick preview to the media and VIP guests.

The driving force behind SKAL Samui’s organisation is a slight, delightfully modest German lady from Munich Jani Sorgel (Jane) who has been in Thailand for over 20 years married to a Thai man. Her committee on the island relaunched the Samui Summer Jazz Festival in June this year after an 8 year hiatus, and it is once again growing in reputation thanks to Jane’s long term friendship with Alexander Beets who organises the main event in Holland, the Amersfoort Jazz Festival – www.amersfoortjazz.nl

Santi Wongwasat a celebrated Thai chef and restaurateur on the island who owns the popular Phensiri restaurant group – along with Jane and their committee organise this event under the banner of SKAL International Koh Samui on a voluntary basis, without corporate ownership and with limited local sponsorship, and it is a wonderful spectacle!

I am not a jazz aficionado but this wasn’t jazz as I knew it. This was a highly motivated group of talented artists getting together and making the palm trees and the floor rock.

At the dinner table at the Santiburi a wonderful 5 star plus retreat on the island, was an 81 year old American who when the rap/hip hop artist from Surinam, now resident in Rotterdam, started his jazz rap sequence, very quickly had everyone dancing on the sand including 81 year old Patrick who admitted he “doesn’t even like hip hop or rap”. The energy emanating from the stage was contagious!

I was seated at the back to begin with but soon moved forward to watch the effect the group had on the mixed age, multi-national audience. It was very impressive.

Samui is Thailand’s second biggest island (229 km²) compared to Phuket (514 km²) and is a little tougher to get to, via Bangkok Airways from Suvarnabhumi or by ferry from Surat Thani, but is worth the expense and difficulty.

I stayed in Bangrak in the NE corner of the island and was very impressed with the beaches, scenery and vibrant bar and restaurant scene.

Special thanks to U Hotel Samui which is a stunning new hotel (1 year old) with villas and suites set right on the beach. I can highly recommend the hotel for families, couples and even the odd individual traveller like me.

The food was excellent, the staff very friendly and the GM runs a happy resort and it shows in the staff’s enthusiasm for their roles. www.usamui.com

I also stayed one night at another rather special new boutique resort on the beach at Bangrak, Tembo www.tembo-samui.com

I was lucky to have been befriended by the delightful PR lady Lynn Grebstad representing SKAL Samui, who was the perfect hostess and introduced me to many of her friends and took me to the island’s best hotels and viewpoints.

I shall be booking my trip to the Samui Summer Jazz Festival next May 2nd – 7th which, by the way, raised THB100,000 this year for their official charity partner ‘Sisters on Samui’ (the International Women’s Group on the island) and will be aiming to raise the stakes in 2023 to benefit their children’s educational programme on the island.

Forgive me TAT – but it is events like this that you need to get behind and promote as they bring a passionate audience from across the globe to Thailand and make them feel loved and appreciated.

Beets and his crew played in Bangkok, Samui, Hua Hin this year. All free to attend and without major sponsorship.