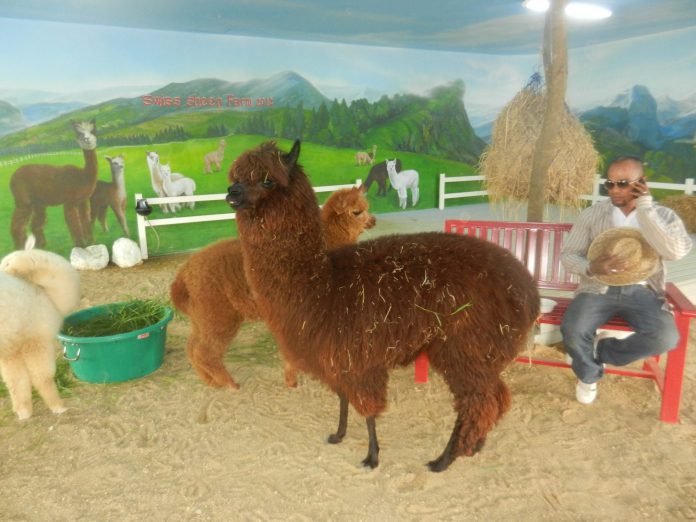 The Swiss Sheep Farm now has three new star attractions.  Around the middle of July they proudly took possession of three rather exotic alpacas.  There are two females, named Snow and Furby and one male going by the name of Porsche.  Strangely enough these three were imported from Holland with a price tag of over 500,000 THB each.

The Alpaca ‘family’ is housed in purpose built accommodation indoors.  This is an air-conditioned ‘suite’ (25 degrees) deliberately separate from the other farm animals with precautions in place to ensure that their health is maintained and that there is no contamination from unfamiliar pests or disease.

To enter the ‘suite’ plastic overshoes are required and visitors are restricted in numbers.  However we are glad to report that the alpacas appear to have settled into their new environment without noticeable stress under the watchful eye of their guardian Khun An.  On the day we visited Porsche and Furby were so relaxed they were behaving in a way which may at a future time result in baby alpacas!

Alpacas warn the herd about intruders by making sharp, noisy inhalations that sound like a high-pitched bray.  These three were not making any of these sounds, perhaps a little nervous but friendly enough and allowing themselves to be patted.  Khun An commented that the biggest issue for him was trying to give them a bath or shower.  Perhaps a little like trying to bathe a cat and a day long process.

An alpaca (Vicugna pacos) is a domesticated species of South American camelid. It resembles a small llama in appearance.  Alpacas are kept in herds that graze on the level heights of the Andes of southern Peru, northern Bolivia, Ecuador, and northern Chile at an altitude of 3,500 m (11,500 ft) to 5,000 m (16,000 ft) above sea level, throughout the year. Alpacas are considerably smaller than llamas, and unlike llamas, they were not bred to be beasts of burden, but were bred specifically for their fiber. Alpaca fiber is used for making knitted and woven items, similar to wool. These items include blankets, sweaters, hats, gloves, scarves, a wide variety of textiles and ponchos in South America, and sweaters, socks, coats and bedding in other parts of the world. The fiber comes in more than 52 natural colors.

The Swiss Sheep Farm has many other attractions and set just below the hillside it’s a very picturesque venue for an enjoyable family day out.  For many young couples there is also a romantic appeal, perhaps a good venue for that first date?  Our host Khun Arnold took us for a stroll around the grounds where visitors were making the most of the many photo opportunities.

What Can You Experience?

Where: Swiss Sheep Farm is located on the left hand side as you approach Cha Am on the highway. Opposite Santonorini park.

Five KMS heading from Cha-Am towards Bangkok on the right hand side.