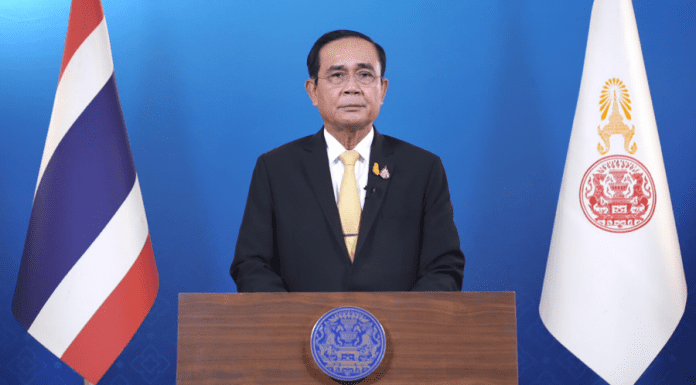 BANGKOK (NNT) – Thailand’s Prime Minister has addressed the nation on the latest COVID-19 situation, following the recent surge in the number of new infections in the Kingdom.

General Prayut Chan-o-cha expressed his gratitude to the monarchy, for providing assistance to the government in their various operations to contain several COVID-19 outbreaks.

The premier said the latest outbreak, before the Songkran holiday, caused ripples that can still be felt, resulting in the increase in the number of daily new patients. He urged people to adhere to prevention measures strictly.

The Prime Minister noted that the Center for COVID-19 Situation Administration (CCSA) and the administration are keeping a close eye on the situation and will impose additional measures if necessary.

Additionally, General Prayut instructed officials to be ready to expedite the vaccination operation and to plan for rehabilitation and compensation in the future.

Furthermore, the Prime Minister said that half of the vaccines that had already been administered were given to medics and frontline workers, while giving his assurance that the administration is looking for ways to obtain additional doses. The government aims to accumulate at least 100 million doses, to vaccinate 70% of the entire Thai population within this year.

The Premier said Thailand has more than 28,000 beds in state, field and private hospitals, and facilities under the “hospitels” program. Although the number of available beds has decreased rapidly over the past couple of days, he said the government is working around the clock to find more beds.

General Prayut also talked about the administration’s budget of 380 billion baht, to stimulate the ailing economy, which will fund various economic measures in the near future.