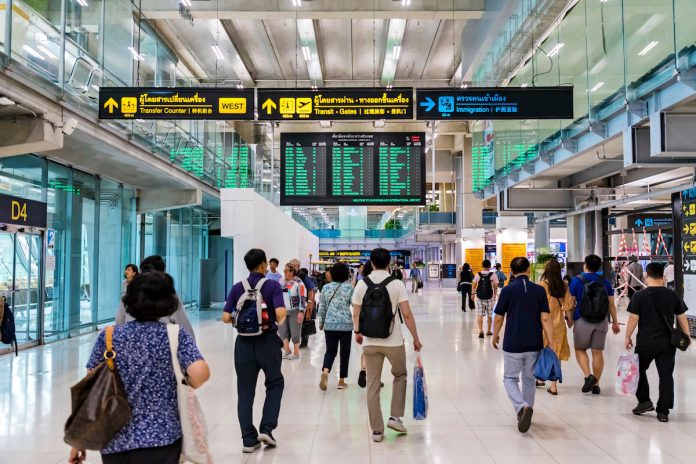 The proposed 300 baht entry fee for tourists to Thailand could start being collected by early next year, it has been revealed.

Speaking on Monday (Aug 30), Thailand’s Minister of Tourism and Sports has revealed the 300 baht fee will be applied to all foreign passengers arriving by plane.

The fee is scheduled to be collected from early 2023, Thai language news site Manager reported.

Tourism minister Mr. Phiphat Ratchakitprakarn stated that the 300 baht fee will be collected from all tourists who arrive in the country by air.

A decision is yet to be made whether the fee will be collected from people arriving in the country by land.

The entry fee, sometimes referred to as a ‘tourist tax’, was first proposed in January 2022 in its current form. However, it has repeatedly been postponed.

The revenue generated from the fee will go towards a number of different uses, such as the upkeep of tourist sites, infrastructure and sustainable development, as well as going towards an insurance fund for foreign tourists.

The fund will help tourists in the event of an emergency, such as accidents, sudden sickness or death.

Tourists will be eligible for a maximum of 500,000 baht for medical expenses should they have an accident or fall ill.

Meanwhile, in the event of death, the tourist’s family will be eligible for maximum compensation of up to 1 million baht.

The system to collect the fee is likely to be integrated into booking systems of airlines with tourists charged at the point of when they pay for a flight ticket.

Thai nationals will be exempt from paying the fee.

However, all foreigners, including expatriates, are likely to be charged the fee whenever they fly into Thailand.

This is because airlines are only able to recognise passenger information, such as nationality, and not the immigration status of a foreign national residing in Thailand.