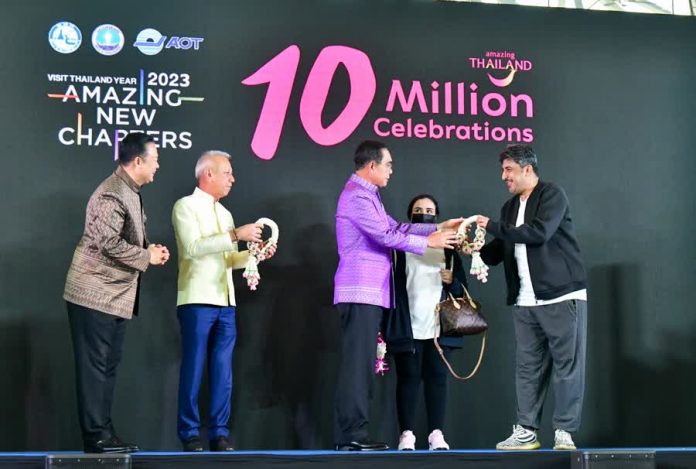 Thailand has reached its target of welcoming 10 million foreign tourists arrivals in 2022.

At events held at airports across the country, Prime Minister Gen Prayut Chan-o-cha personally welcomed Hetham Almdlj and Njood Alkhuwaiter, who arrived together at Suvarnabhumi Airport on December 10.

Upon their arrival and after being greeted by traditional Thai dancers and drummers, the two lucky tourists were presented a cash prize worth more than 200,000 baht.

“We believe the sky after the rain is always clear. Today the sky is open, and so are our borders,” Thai Prime Minister Prayut Chan-O-Cha said in a speech at the airport.

“We won’t stop at this success. We will create more confidence that Thailand is still a global destination that’s more than ready to welcome travellers.”

The 10 million foreign arrivals are a drastic contrast to less than half a million overseas visitors in 2021. Foreign tourist receipts should generate more than 500 billion baht in revenue by the end of 2022, according to the Tourism Authority of Thailand. Tourism is a key growth driver and accounts for 12% of Thailand’s economy, which is Southeast Asia’s second-largest but has lagged regional peers. Consumer confidence rose for the sixth straight month in November to the highest level since March last year, supported mainly by higher tourism numbers.

The momentum is expected to continue in 2023, with a target of 20 million overseas arrivals and 1.5 trillion baht in foreign tourist receipts. That would put Thailand halfway to the number of foreign tourists seen in 2019, just before the pandemic, and 80% of the revenue generated by foreign visitors back then.

Thai hotel owners and restauranteurs have breathed a sigh of relief as business has slowly picked up.

Marisa Sukosol, president of the Thai Hotels Association, welcomed the 10 million travellers milestone “after two years and a half of pain”.

“I think next year we will see continuous momentum of growth,” she said, pointing to the return of tourists from Russia and across the Asia-Pacific region.

But she cautioned against over-optimism — economic stagnation as well as lingering pandemic threats continue to impact the tourism sector.