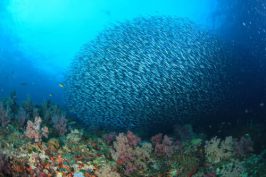 BANGKOK (NNT) – Thailand is preparing to nominate Andaman Marine Protected Areas as a World Heritage Site at a World Heritage Committee session in July, hoping to help stimulate the economy post-COVID-19 while promoting a sense of pride among Thai people.

The Thai government is preparing to add Andaman Marine Protected Areas to its tentative list for UNESCO World Heritage at the upcoming 44th session of the World Heritage Committee on 16-31 July.

The decision was reached in a virtual meeting of the national committee on the World Heritage Convention, chaired by Deputy Prime Minister Gen Prawit Wongsuwan, and attended by the Minister of Natural Resources and the Environment Varawut Silpa-archa, and the Minister of Culture Ittipol Khunpluem.

The nomination process involves the inclusion of the Andaman Marine Protected Areas on Thailand’s tentative list, which will later be presented to the World Heritage Center.

The government anticipates this nomination will help promote a sense of pride in local heritage sites, while promoting the sites as learning and tourism attractions, which help attract more tourists and should stimulate the economy once the COVID-19 situation abates.

This effort to achieve world heritage nomination is also considered to comply with the National Reform Strategy on Natural Resources and the Environment.

Thailand has been elected to membership of UNESCO’s World Heritage Committee in the Asia-Pacific Group, valid for the 2019-2023 term.