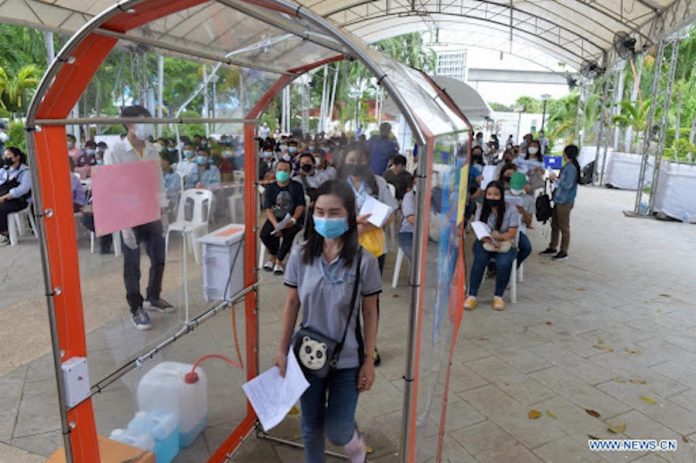 (Xinhua) — The cumulative COVID-19 cases in Thailand surpassed 1 million on Friday, driven by a continued surge in infections, primarily attributed to the spread of the highly contagious Delta variant.

On Friday, the number of daily cases dipped below 20,000 for the first time in 10 days. With 19,851 new cases reported, and the country’s total tally now stands at 1,009,710, according to the data released by the Ministry of Public Health.

The ministry also reported 240 fatalities over the past 24 hours, taking the death toll since the start of the pandemic to 8,826.

More than 97 percent of Thailand’s total caseload has been reported since the latest outbreak originated in the capital Bangkok in early April.

Since then more cases caused by the variants Alpha and Delta have been rapidly detected, with the Delta variant now being the dominant among the infections.

There are currently 205,079 active cases nationwide, of which 5,388 are in critical condition with 1,161 on ventilators. A slight decrease in hospitalized patients has been shown, however, the country’s medical infrastructure is still under great pressure.

The Thai government aims to vaccinate around 70 percent of the nearly 70 million population by the end of the year and hence has recently intensified efforts to secure more vaccines and accelerate the roll-out process.

As of Thursday, Thailand has administered over 25.8 million doses of COVID-19 vaccines, with around 8 percent of its total population fully vaccinated.