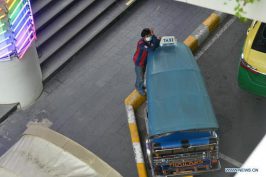 BANGKOK, May 19 (Xinhua) — An upsurge in new coronavirus cases has forced Thailand to reimpose restrictions, triggering concern that the tightening would choke the country’s economic recovery.

The Thai economy shrank 2.6 percent from a year earlier in the first quarter of the year, the Office of the National Economic and Social Development Council said Monday, lowering its full-year forecast for economic growth to 1.5-2.5 percent from the previous estimate of 2.5-3.5 percent.

This came after the Bank of Thailand (BOT), the country’s central bank, warned early this month that growth may only expand 1-2 percent this year as the third wave of the coronavirus outbreak dents consumption while the pace of vaccination is affecting foreign tourist arrivals.

The third wave of the outbreak, with new cases hitting a record high on Monday, has almost quadrupled the Southeast Asian country’s total caseload since the beginning of April.

It came at a time when the tourism-reliant country was preparing to reopen more broadly to foreign visitors. However, with closed schools, empty stadiums and quiet shopping malls, hopes for a rapid rebound from the recession have been clouded.

On a quarterly basis, the Thai economy rose a seasonally adjusted 0.2 percent in the first quarter, moderating from the prior quarter’s growth of 1.1 percent.

The situation led the government into a fresh dilemma of containing the virus resurgence and boosting its domestic demand which had started to recover in March before plunging again last month.

Thailand’s industrial sentiment index for April fell to an eight-month low of 84.3 from 87.3 in March as the latest outbreak weakened economic activities and dampened business confidence, the Federation of Thai Industries said.

The three-month sentiment index in April, looking ahead to the likely situation up to July, also declined to 91.8 from 94 a month earlier, the federation said.

The country’s consumer confidence index also slumped in April to 46, its lowest level in more than two decades, data from the Economic and Business Forecasting Center at the University of the Thai Chamber of Commerce showed.

Although the government’s economic stimulus measures and improving imports would lend some support, the Kasikorn Research Center expected the worsening outbreak to dent the country’s economic growth.

The pace of the Thai economic recovery would be much slower due to the coronavirus flare-up, and recovery ahead would mainly depend on the procurement and distribution of vaccines, the BOT has said earlier this month.

However, the pace of the country’s vaccine roll-out has been relatively slow compared with its plan to inoculate 70 percent of its nearly 70 million population by the end of the year.

The government has been rushing to secure more vaccines for a mass vaccination campaign starting next month, and encouraging the public to get vaccinated.

As the economy is mired in uncertainties, officials and economists believe enhancing bilateral and regional cooperation would be the way out.

Thailand’s economy posted its steepest decline in more than two decades last year, and its recovery this year will to some extent depend on how it enhances cooperation with China, said Wichai Kinchong Choi, senior vice president of leading Thai bank Kasikornbank.

Wichai took durian exports as an example. Thailand exported 186 million U.S. dollars’ worth of durian to China in the first quarter of the year, up 14 percent from one year earlier, evidence of the resilience of the Chinese market, which he said is becoming more important for Thailand as demand from the European Union and U.S. markets has dried up.

Chayawadee Chai-Anant, a senior director at the BOT’s Economic and Policy Department, also called for closer cooperation among Asian economies to reduce the potential risks and long-term adverse effects the pandemic had on economic development.

“We have already had firm cooperation in the trade and financial sector, should only be in an increasing trend going forward,” Chayawadee said in an interview with Xinhua.

She warned about risks of possible capital flight from emerging economies amid the discrepancies in economic recovery, pace of vaccination, debt levels as well as employment losses.

To avoid these economic scars, economies should focus on upskilling and reskilling to help workers impacted by COVID-19, as well as enhancing cooperation in developing infrastructure to boost investments, she said.

“If we have good and ready infrastructure, especially soft infrastructure such as digital and regulations, it would provide us a great help to transform to fit the new world,” she said.