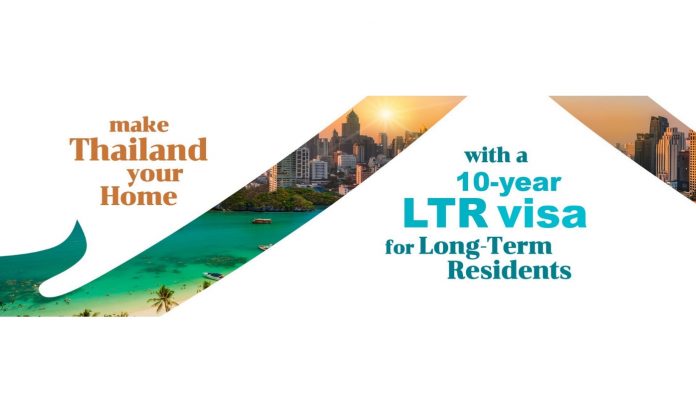 Thailand is now welcoming applications for its new 10 year Long-term Resident Visa (LTR Visa), which is aimed at attracting foreigners of “high potential” to live and work in the country.

The LTR Visa formally came into effect on September 1, with the government seeing the program as a way to encourage new investment into the country.

Across each of the four categories, holders will need a personal income of USD 80,000/year.

However, there are a number of benefits for holders of the visa, including work permits, 1 year reporting to Immigration instead of every 90 days, the removal of the requirement for employers to hire four Thai citizens per foreigner, fast track at international airports and greater ease of regulations concerning foreign residents.

For ‘Wealthy Pensioners’, these are defined as retirees aged 50 years and older who have “personal income of at least USD 80,000/year at the time of application”.

Alternatively, “in case of personal income below USD 80,000/year but no less than USD 40,000/year, applicants must invest at least USD 250,000 in Thai government bonds, foreign direct investment, or Thai property.”

For ‘Work-from-Thailand Professional’ they need to show “personal income of a minimum of USD 80,000/year for the past two years”.

They also need to be employed by a “public company on a stock exchange or; Private company in operation for at least three years with combined revenue of at least USD 150 million in the last three years”.

Applications for the LTR Visa can be made at “the Royal Thai Embassies/the Royal Thai Consulate Generals overseas or Immigration offices in Thailand within 60 days from the issuance date of the endorsement letter”.

Previously, the Thai government had estimated that the new LTR Visa program would help to attract up to one million new expats to settle in the country within the next five years.

“The long-term resident visa program will help Thailand in the post-Covid economic recovery,” Duangjai Asawachintachit, secretary-general of Thailand’s Board of Investment, told Bloomberg on Wednesday.

“The validity period of LTR is the longest probably, and with so many expats working in Thailand for a long time, this meets a long-standing demand.”

Meanwhile, Narit Therdsteerasukdi, deputy secretary general of the Thailand Board of Investment, recently told DW that he estimates that at least 50% of the applicants for the LTR visa will be from Europe.

“We are confident the LTR will attract significant interest in our target groups in Europe,” he said.

“Thailand is already a favorite destination for Europeans. … The responses we got from the prelaunch campaign reflect strong interest. I anticipate the LTR will become even more popular after the launch,” he added.