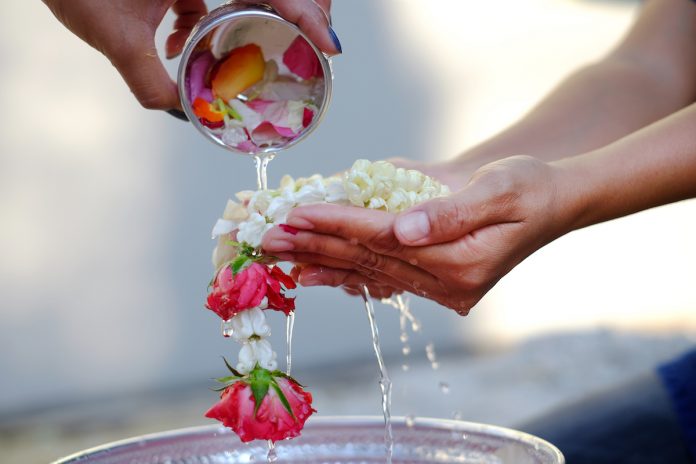 Songkran is the largest and most famous festival in Thailand and marks the start of Thai New Year. For younger people it is perhaps best known for its large-scale water fights (or at least it was until the pandemic) but is also known for its traditional water blessing ceremonies. An important event in the Buddhist calendar, Thais will also use the Songkran holidays as an opportunity to return home and spend time with their families.

Originally, the Songkran festival’s date was determined by astronomy, but now, the official date, Songkran takes place is April 13-15. However, depending on the province, celebrations can continue for a week, sometimes longer. Pre-COVID, the Songkran celebrations in places such as Pattaya and Chiang Mai can often take place for up to seven days and longer.

What are the origins of Songkran?

The word Songkran is from a Sanskrit word that means passing or moving and is a metaphor for relocating the zodiac imprint or entering the New Year. Songkran was originally Thailand’s New Year’s Day, and signified the start of the Thai calendar. Between 1888 and 1940, Songkran and New Year’s Day in Thailand was celebrated on April 1 but was later changed to April 13-15, when January 1 became synchronized across the world as New Year’s Day.

Where else is Songkran celebrated?

Other than in Thailand, Songkran is celebrated in Laos, Cambodia, Burma, the Tai ethnic minority of Vietnam, and in China’s Yunnan province as well as in Sri Lanka and other eastern Indian countries. The Songkran festival is culturally rooted in India’s Holi festival. The Holi festival uses a splash of color instead and is celebrated in March.

How is Songkran celebrated in Thailand?

Water is a central element to Songkran and traditionally people would sprinkle water on one another as a way to cool down during the peak of the Thai summer season.
Today, that has escalated somewhat to large scale water throwing celebrations where people use buckets and water pistols to soak anyone within reach. Appreciation of family and elders is also an important part of Songkran. More traditionally, people will mix clean water, fresh flowers, or garlands to pour over the hands of their parents, grandparents or other elderly family members or neighbors.

What are some traditional activities that Thai people do on Songkran? With COVID-19 preventative measures putting a temporary halt to water throwing, people in Thailand will be opting for more traditional celebrations this Songkran, such as:

Making merit: Many Thai people will visit a temple during Songkran to make merit and pay their respects to people who have passed away. This type of merit-making is frequently planned ahead of time by bringing food to the temple pavilion to offer to the monks.

Sand pagoda work: After making merit, some people may build sand pagodas at their local temples. The building of pagodas is a religious Thai tradition that highlights teamwork among residents who work together to build the pagodas.

Releasing fish and birds: People will release fish and birds at their local temple as a form of making merit. Releasing the animals from the confines of a cage or giving them freedom is meant to signify a cleansing of the sins or a means of eliminating misfortune to bring happiness and comfort. Pouring water on an adult or elderly person: This is a mark of respect for adults such as parents, teachers and other respected people. Water is poured on the hands of the person who will then bless the individual who is pouring the water.

Bathing the Buddha: Bathing images or statues of Buddha either at home or at a temple. This is typically performed at the end of the merit making ceremony.

House cleaning: The biggest cleaning day of the year, Songkran is when Thai people clean, sweep, and mop to get rid of bad items from their houses. The cleaning symbolizes ridding the home of any terrible things that have occurred during the previous year in readiness for better things for the year ahead.