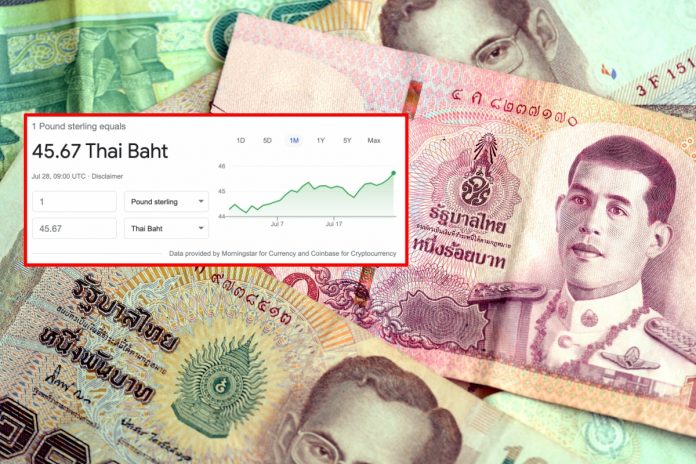 For years, expats in Thailand have bemoaned the strength of the Thai baht, but not any more.

According to a recent report by CNBC, the Thai baht is now the worst performing currency in Southeast Asia.

The baht, which pre-pandemic was one of the region’s strongest currencies, has been in steady decline throughout 2021.

CNBC’s report cited an investors note by Japan’s Mizuho Bank which stated “uncharacteristic under-performance in the Thai Baht, rendering it the worst performer to date in 2021”.

Just two years ago, the strength of the Thai baht was a concern among economists and expats alike.

A stronger currency makes the country’s exports more expensive, causing them to be less attractive in international markets, CNBC noted.

The report also stated that Thailand’s plan to re-open to foreign tourists on October 1 is probably “too ambitious”.

But the slump of the baht, while problematic for Thailand’s economy, is music to the ears for many expats, especially those whose income comes from overseas.

Expats who receive monthly pension payments or draw income from overseas are benefiting from some of the most favourable exchange rates of recent years.

On Wednesday (July 28) the baht reached an almost five year high against the British pound, with Brits able to get 45.61 baht to 1 pound sterling, closing in on the previous high of 46.0 baht to the pound back in September 2016.

It’s a similar story across other currencies, with the USD at a three year high against the baht and the EUR at a four year high.

And while expats, particularly Brits, are some way off the halcyon days of 55, 60 or even 70 baht to the pound, they’ll almost certainly be hoping the baht’s slump continues for some time yet.