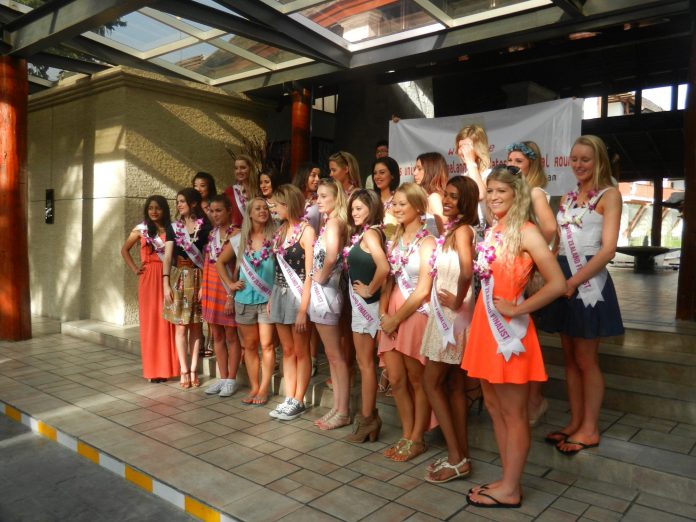 If you were fortunate enough to be a guest or visitor to the Veranda Resort in late August you would have been surprised (and probably delighted!) to encounter a bevy of beauties from New Zealand.  These ladies were the finalists for selection as Miss Universe New Zealand 2013.  One of these finalists will be announced as the winner in Auckland in early October.

Their journey to Thailand began with a flood of entries which was cut back to 80 contestants who all attended boot-camps in Auckland and Wellington, where the final 20 were chosen.  An additional Ambassador on the journey here was the Thailand Ambassador to New Zealand, Khun Noppadon Theppitak.

On August 27th, the girls were in the spotlight at a televised Breakfast Show on National New Zealand TV when the secret location of the ‘Finalists’ Retreat” was announced.  They arrived in Bangkok on August 28th and then to the main venue for their selection process in Cha-Am.  They spent two nights at the Veranda Resort, which included a bikini photo shoot; after all wearing bikinis in New Zealand at this time of the year was not likely to be a pleasant experience! The journey then continued to Ayutthaya before returning to Bangkok and homewards.  The final event of the trip was a formal reception at the Thailand Department of Foreign Affairs.  Support from this Department and the Tourism Authority of Thailand was the main reason for Thailand being the destination of choice.

Hua Hin and Cha-Am Today was privileged to have exclusive access to these charming young ladies at the Veranda Resort thanks to the hospitality of the Executive Director of Miss Universe New Zealand, Nigel Godfrey and the General Manager of the Veranda Resort & Spa Khun Panit Boonyaratvej.

There was clearly some excitement and anticipation at Veranda as a guard of honour was formed awaiting the bus arrival from Bangkok.  As some of the contestants had never travelled out of their home country before and many were wide eyed and a little bewildered as they disembarked.  They returned the greeting with big smiles and some embarrassment.  After all they were only told about the trip to Thailand two days ago and were really out of their comfort zone!

The girls are certainly were certainly not just selected for their external beauty and proved to be both articulate and with personality to match, beautiful ambassadors from a beautiful country.

They come from diverse professional and educational backgrounds and were really eager to represent their country in the pageant.  We met medical, psychology and law students.  Twenty one year old Emily Coates has just completed her Real Estate licence and Kylie Tan is a Pre School teacher.  Hayley Robinson, a 20 year old from Palmerston North said that after her selection as a finalist and learning of the trip to Thailand ‘I kind of went into shock.  The other girls were amazingly beautiful; I was just so excited and happy.’

‘As for coming to Thailand; WOW, we love it!’

Apart from spending time meeting the contestants we were also able to talk with the ‘main man’ of Miss Universe New Zealand, Executive Director Nigel Godfrey.  Nigel is well known both behind and in front of the camera in New Zealand.  He first became involved in beauty pageants in London in 1986 when he worked for the Miss World Group and Thames TV (England) on the international final of Miss World. Nearly 30 years on he is delighted to once again be involved with such an exciting project.

‘Three decades is a long time and society’s approach to women and beauty competitions has changed immeasurably in that time. I am incredibly excited to be involved in reinventing the fantastic brand that is Miss Universe New Zealand that has unfortunately been allowed to languish in our country for far too long. The road to discovering Miss Universe New Zealand 2013 will feature innovation, integrity, entertainment and viewer involvement,’ said Nigel.

Our thanks to the Veranda Resort & Spa management and the pageant organisers for this opportunity to meet these superb ambassadors from New Zealand ‘up close and personal’ and to get some insights into why this competition has such a high international profile.
Miss Universe has just announced that the world final will be held in Moscow, Russia in November. The winner from our New Zealand visitors will be representing the country at that competition.

The reigning Miss Universe Thailand is Chalita Yaemwannang, who was crowned on May 11, 2013 at the Royal Paragon Hall, Siam Paragon in Bangkok.  She will be the representative for Thailand at the Miss Universe 2013 pageant in Russia.