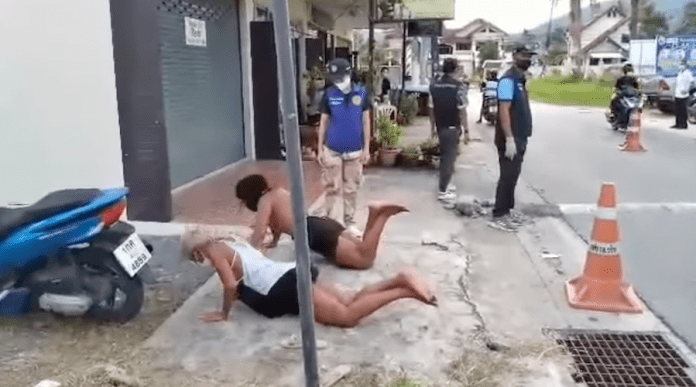 Thais and foreigners in Phuket were forced to do bodyweight squats, press ups and lunges as a punishment for either not wearing a face mask or wearing it incorrectly.

Officials decided on the physical punishment, as opposed to issuing fines, while manning a checkpoint in the Rawai district of Phuket on Friday.

The checkpoint was manned by officers from Chalong Police Station and local medical staff, who said that many people were not wearing their face masks correctly, while some were not wearing any face covering at all.

The medical staff said the face mask should cover the nose and mouth and should not be worn around the chin.

Police said they issued the unusual punishment as a ‘first warning’ and to help raise awareness of the importance of wearing a face mask. Officers said that all those who were stopped had their identification details recorded and if they are found again to be without a face mask or wearing it incorrectly, they can expect to receive a fine.

Fines are issued at the discretion of the officer or determined by the rules specific to a particular province.

In Hua Hin, we have not received any reports of people being fined for  not wearing a mask.

However, that doesn’t mean you should venture out in public without one!

Face masks are mandatory in Prachuap Khiri Khan, as per an order issued by the Ministry of Interior last month.