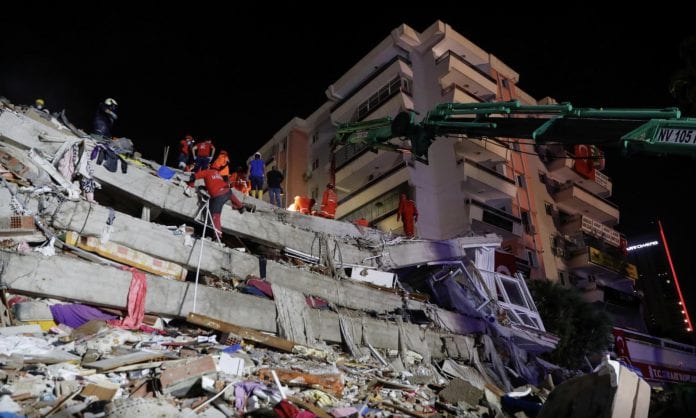 Izmir, Turkey – Nineteen people were killed in Turkey and Greece after a powerful earthquake struck the Aegean Sea on Friday, bringing buildings crashing down and causing tidal waves to slammed into coastal areas and islands.

A magnitude of 7.0 quake strikes the region as people panicked and ran out to the streets of Izmir, city of Turkey. Houses were rapidly flooded by the seawater surge sweeping debris inland and left a number of marine animals stranded at the shore.

Turkey’s Disaster and Emergency Management Presidency (AFAD) said 17 people died, one from drowning and 709 others were considerably injured.

Meanwhile, on the Greek island of Samos two teenagers were found dead under a wall that had collapsed.

Sitting in the middle of major fault lines, Turkey is among the most earthquake-prone countries in the world. More than 17,000 people were killed in August 1999 when a 7.6 magnitude quake struck Izmit, a city southeast of Istanbul. In 2011, a quake in the eastern city of Van killed more than 500.

“We have never experienced anything like it,” said George Dionysiou, the local vice-mayor. “People are panicking.” A Greek police spokesman said there was damage to some old buildings on the island.

The leaders of Turkey and Greece – caught up in a bitter dispute over exploration rights in the eastern Mediterranean – spoke by phone and expressed hopes that both countries would see a speedy recovery from the quake, Turkey’s presidency said.

Both leaders said they were ready to help the other country if needed and emphasised the importance of unity.