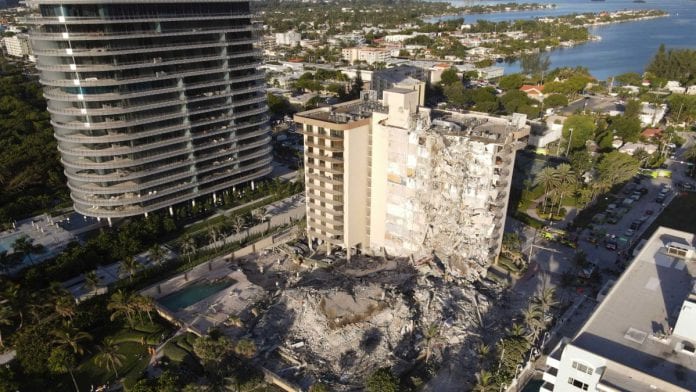 (Xinhua) — At least four people have been confirmed dead while the number of the missing rose to 159 after a 12-story residential building partially collapsed early Thursday in Miami-Dade County in southeastern U.S. state Florida, local media reported on Friday.

The Champlain Towers South condominium, built in 1981, partially collapsed around 1:30 a.m. local time on Thursday in the beachside town of Surfside, about 6 miles north of Miami Beach.

About 70 of the condo’s 130 apartments were destroyed or damaged, according to Frank Rollason, director of Miami-Dade Emergency Management.

All the numbers are “fluid” because some residents may not have been in the building when it collapsed, the mayor said, noting that rescuers will “continue searching because we still have hope that we will find people alive.”

U.S. President Joe Biden has declared a state of emergency authorizing funding and other disaster relief to Surfside. The Federal Emergency Management Agency was sending support, the mayor said.

At least 27 people from Latin American countries, including Colombia, Cuba, Chile, Paraguay, Puerto Rico and Argentina, are among those reported missing by friends and family following the collapse, according to a report from local newspaper Miami Herald on Friday.

Florida state fire marshal Jimmy Patronis said on CNN on Friday morning that search and rescue teams were using everything at their disposal in the search for life, cutting into the concrete with saws and using infrared cameras after boring through holes in the rubble, along with sonar and specially trained dogs.

“The live active rescue will continue,” Patronis said without going into how long he thinks a person can survive under the debris.

The first lawsuit, seeking 5 million U.S. dollars in damages for the victims of the condo collapse, was filed late Thursday. The cause of the oceanfront condo’s collapse is unknown at this early stage.