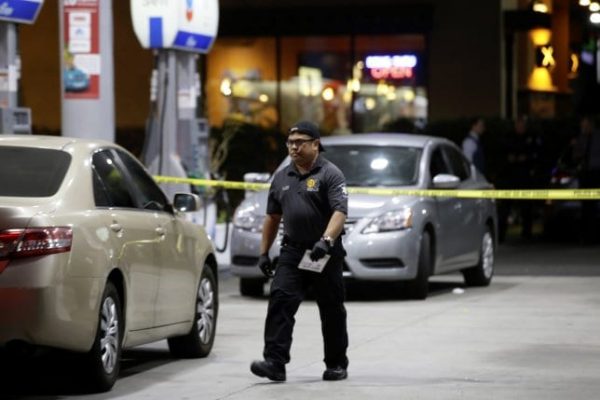 A man has been arrested after four people were killed and two others injured in series of robberies and stabbings in southern California, police have said.

The man, 33, from Garden Grove was taken into custody after dropping a knife and a gun after the attacks in Orange County, authorities said. The violence appeared to be random and the only known motives appear to be ‘robbery, hate, homicide’, Garden Grove police lieutenant Carl Whitney said at a news conference.

He said: ‘We know this guy was full of anger and he harmed a lot of people tonight.’ The attacks took place over about two hours in Garden Grove and neighbouring Santa Ana, south-east of Los Angeles.

Mr. Whitney said police first answered a call to a burglary at an apartment, where no one was hurt. Mr. Whitney said a bakery was robbed, an insurance business was robbed and a woman was stabbed several times in the back. She is expected to survive.

A caller reported watching the stabbing from closed-circuit television, Whitney said. Police were called back to the same apartment complex, where two men had been stabbed. One died on a balcony and another died at a hospital. A cheque-cashing business also was robbed, as well as a gas station where a man was slashed so badly that his nose was nearly severed, Mr. Whitney said.

The suspect’s silver Mercedes was tracked to the parking lot of a 7-Eleven store in Santa Ana, where a security guard was disarmed and stabbed to death, Mr. Whitney said. An employee of a nearby Subway store was also killed.