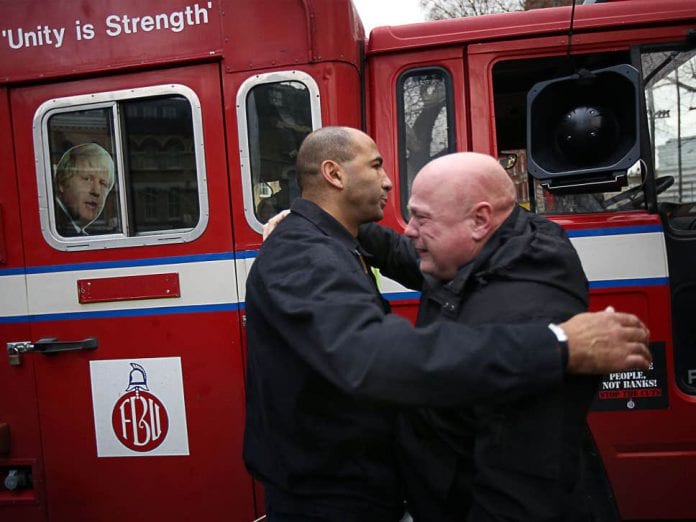 Firefighters in London wept and embraced each other as fire stations, including the UK’s oldest, closed on Thursday due to cuts.

There are fears that the closures will endanger the public as 10 London stations closed their doors for the last time, as part of a drive to make £45 million worth of savings over the next two years.

The shutdowns mean 552 firefighter jobs and 14 engines are also being cut from the capital’s brigade after seven London boroughs failed last year to legally challenge the closures.

Clerkenwell station, which is 140 years old, closed after Green Watch attended their final call: a blaze at block of flats in Regents Park near King’s Cross station. Firemen and women left, in civilian clothes, saying they had been told by their bosses they could not wear their uniforms. Supporters clapped as they departed. 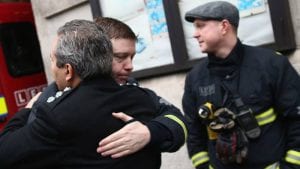 Alex Baddock, who has worked at the station for 29 years cried as he left the building.

“This is a sad, sad day. Boris Johnson doesn’t know what he’s doing.”

About 50 residents and firefighters gathered for the final watch at Westminster Fire Station on Horseferry Road.

Artemis Kassi, 42, a local mother who was there with her six-year-old daughter Maryam, has been campaigning to save the 107-year-old station. She told the Evening Standard: “I am angry, appalled and, frankly, disgusted, that it has come to this. We are here to show our support, thanks and recognition to the firefighters who have served our community so well.”

Paul Embery, London regional secretary of the Fire Brigades Union (FBU), said: “Boris Johnson will have blood on his hands. It will be only a matter of time before someone dies because a fire engine did not get to them in time.

“These stations have protected generations of Londoners, and they are as necessary now as they ever were.”

James Cleverly, chairman of London Fire Brigade, said: “The brigade is faced with significant budget cuts which mean that changes to the service are inevitable and we are able to make those changes without compulsory redundancies.

“The firefighters based at the stations closing will now transfer to other stations and continue the excellent work they do to prevent fires, which is vital in changing the behaviours that start fires in the first place.”

“Londoners will continue to receive one of the fastest emergency response times in the world from the London Fire Brigade,” he said.

US to stop funding WHO, blaming it for mishandling the Covid-19 outbreak