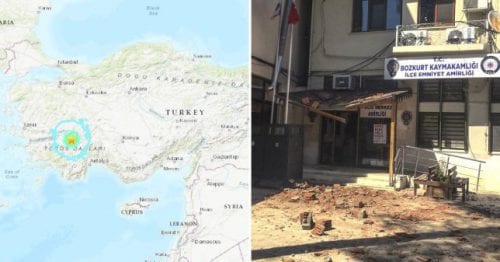 Turkey has been rocked by a 6.0 magnitude earthquake, which damaged homes and injured residents in a south western province. Two houses were destroyed when the quake struck in the town of Bozkurt, Denizili, at around 2:25 p.m. local time.

According to reports, people ran out into the streets and were urged not to return to the damaged homes. Residents managed to escape from the properties that were damaged with only slight injuries. It is reported the tremor caused damage to houses in the nearby town of Tutluca although no-one was hurt there. A mosque in the nearby village of Agdan is also said to have toppled over and the tremor was felt in the neighbouring provinces of Antalya, Mugla, Isparta and Burdur.

Turkey is prone to earthquakes because it is situated in-between the tectonic plates of Eurasia and Africa/Arabia. In 1999, a magnitude 7.4 quake in Turkey killed more than 17,000 people in the north west.