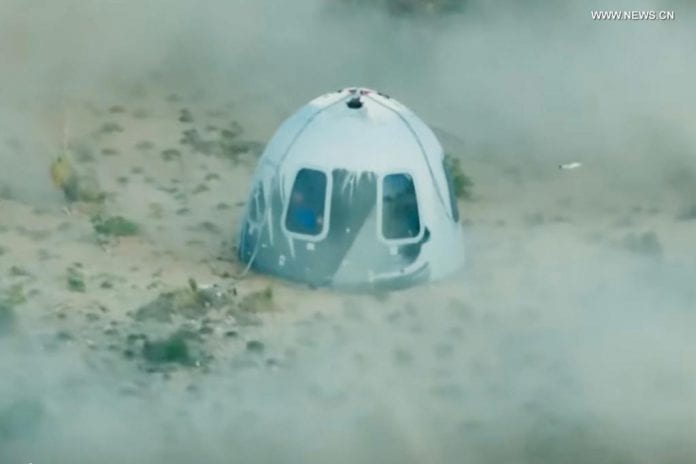 The company’s spacecraft New Shepard lifted off at about 8:12 a.m. Central Time on Tuesday (1312 GMT) from its West Texas test site.

The vehicle was launched to an altitude of about 100 kilometers from Earth, where the passengers experienced several minutes of weightlessness. The craft then descended under parachutes and landed again in the West Texas test site.

The booster touched down separately. It is the third successful landing for this rocket and the first to carry four private citizens to space above the Karman Line – the internationally recognized boundary of space, according to Blue Origin.

“Congratulations to all of Team Blue past and present on reaching this historic moment in spaceflight history. This first astronaut crew wrote themselves into the history books of space, opening the door through which many after will pass,” Blue Origin tweeted after the flight.

It was New Shepard’s 16th flight to space and its first crewed flight.

Named after Mercury astronaut Alan Shepard, the first American to go to space, New Shepard is a reusable suborbital rocket system designed to take astronauts and research payloads past the Karman line.

In addition to suborbital trips offered by Virgin Galactic and Blue Origin, SpaceX is planning orbital tourism flights beginning later this year with the first mission to space with an all-civilian crew.

There has also been critics in the United States saying that these flights to space are just “joy rides” for the wealthy, complaining they should be spending time, money and energy trying to solve problems on Earth.