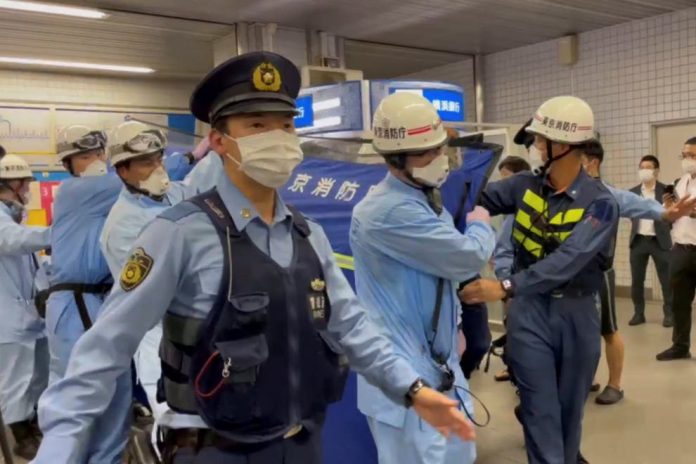 TOKYO, Aug. 8 (Xinhua) — A man was arrested on Saturday after injuring 10 passengers in a knife attack on a commuter train the previous evening in Tokyo, local media reported Saturday.

Yusuke Tsushima, 36, was charged with attempted murder for allegedly stabbing a 20-year-old female college student with a knife, causing serious injuries to the back and chest. None of the 10 wounded was acquainted with the man.

Tsushima has admitted to the assault, telling the police, “I have been wanting to kill happy-looking women for the past six years. Anyone would have been okay.” He also said that he chose to commit a crime on a rapid express Odakyu Electric Railway train because passengers were hard to run away.

According to the police, he stabbed the woman and injured others in No. 7 car. Then, he failed to start a fire with cooking oil in the No. 8 car. As the train made an emergency halt, Tsushima escaped from a door of the No. 9 car.

Tsushima was detained later that night at a convenience store, police said.

In 2015, a man set himself on fire on a shinkansen bullet train, resulting in himself and a female killed as well as 26 other passengers injured. In 2018, a man killed a passenger and injured two others in a knife attack on a bullet train.

The transport ministry has asked all the railway companies to thoroughly check their surveillance activities through security staff and cameras to ensure safety.