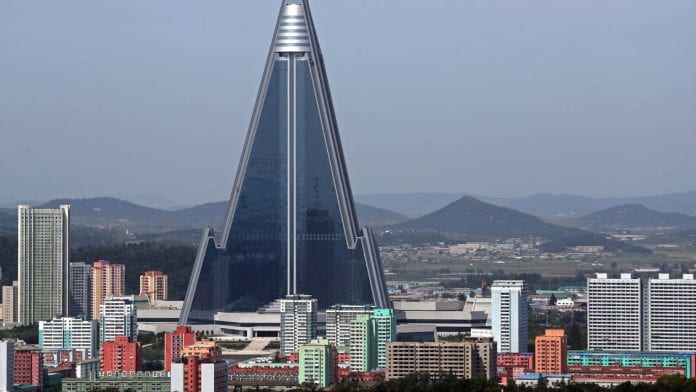 In 1987, ground was broken on a grand new hotel in North Korea’s capital, Pyongyang. The pyramid-shaped, supertall skyscraper was to exceed 1,000 feet in height, and was designed to house at least 3,000 rooms, as well as five revolving restaurants with panoramic views.

The Ryugyong Hotel — named after a historical moniker for Pyongyang meaning “capital of willows” — was supposed to open just two years later. But it never did.

While the structure reached its planned height in 1992, it stood windowless and hollow for another 16 years, its naked concrete exposed, like a menacing monster overlooking the city. During that time the building, which dwarfs everything around it, earned itself the nickname “Hotel of Doom.”

The hotel has since been clad in metal and glass, and was later fitted with LED lights to turn it into a colourful night time spectacle. Construction work has started and stopped many times, fueling constant speculation over whether it will ever open to guests.

Still closed to this day, the Ryugyong Hotel is the world’s tallest unoccupied building.