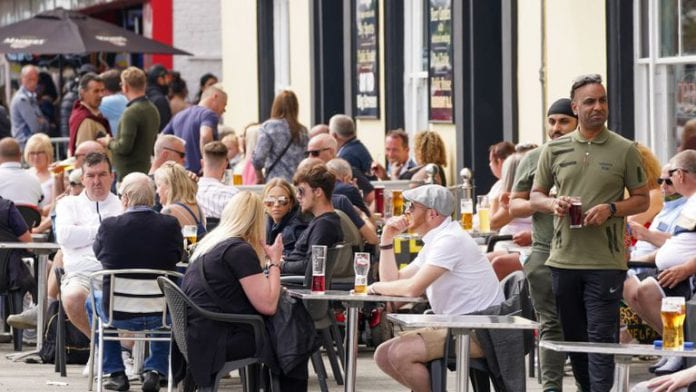 LONDON, May 31 (Xinhua) — There is a “significant chance” that the date of June 21 for the final step of lifting coronavirus restrictions could change, a British government adviser said Monday.

Professor Adam Finn from the University of Bristol, also a member of the Joint Committee on Vaccination and Immunisation (JCVI), said “things are much more up in the air” than they were earlier this month due to the spread of the India-related variant in Britain.

“In a way, I think, the dates (of the roadmap) all the way through were created just to give everyone some kind of sense of structure,” Finn told Sky News.

“But they were always qualified as being based on what actually happened and that they could change. I think there’s a significant chance that it could change,” he said.

“We’re better off being cautious at this point and being able to progressively unlock ourselves than to overdo it and then end up having to lockdown fully all over again.”

His warning came as Britons gathered on beaches, in parks and beer gardens to enjoy the bank holiday sunshine on Monday.

The cases of COVID-19 variant first detected in India have doubled in a week in England to almost 7,000, prompting concerns that the British government’s lockdown roadmap will be derailed.

From May 17, pubs, bars and restaurants in England were permitted to open indoors, while indoor entertainment resumed, including cinemas, museums and children’s play areas.

People were also allowed to travel abroad to a number of “green-list” countries without having to quarantine upon return as the ban on foreign travel has also been lifted.

The British government’s roadmap is expected to see all legal limits on social contact to be removed on June 21. It is understood that a final decision on the planned easing of lockdown will not be made until June 14.

More than 39.2 million people, about three-quarters of adults in Britain, have been given the first jab of the coronavirus vaccine, according to the latest official figures.

Experts have warned that coronavirus may continue to evolve for years to come, and eventually it is likely current vaccines will fail to protect against transmission, infection, or even against disease caused by newer variants.