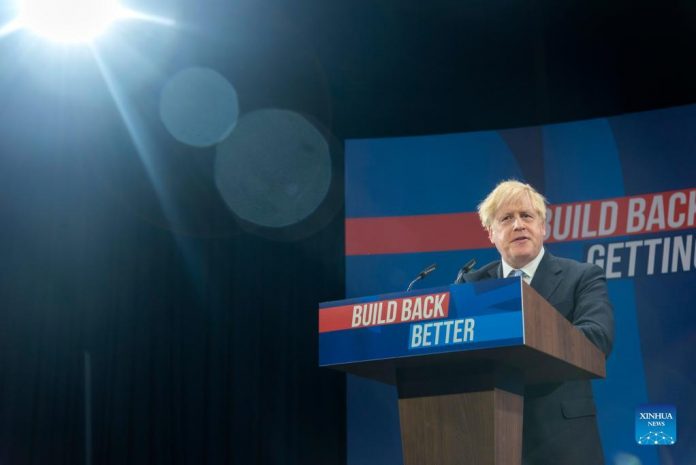 (Xinhua) — British Prime Minister Boris Johnson on Wednesday vowed to change the direction of the British economy, shifting away from its reliance on cheap imported labor, as he shrugged off the ongoing fuel, food and industry crises as “merely a function of growth and economic revival.”

In a speech to end the Conservative Party’s four-day annual conference in Manchester, Johnson pledged that his top team will get on with “the job of uniting and levelling up across the UK,” calling it “the greatest project that any government can embark on.”

The prime minister vowed to address economic inequality to provide greater opportunities around the whole country, by carrying out new road, rail and technology infrastructure projects after “decades of ducked decisions.”

He said there needed to be more investment in people, skills and facilities to create a “high-wage, high-skilled, high-productivity” economy.

To alleviate the disruption to the education system caused by the COVID-19 pandemic, he announced a “levelling-up premium” worth up to 3,000 pounds (about 4,076 U.S. dollars) to encourage science and maths teachers to underprivileged areas of the country where schools are more likely to face teacher supply and retention issues.

Johnson called the upcoming COP26 climate conference in Glasgow the “summit of our generation” but didn’t provide any new detail for Britain’s net-zero ambitions.

The prime minister’s ambition and optimism for levelling up Britain, though winning applause from within the party, doesn’t seem to quite convince others. The country is yet to recover from the pandemic but its economic prospects are fogged by worker shortages and rising inflation.

Ed Davey, leader of the Liberal Democrats, tweeted: “Boris Johnson might as well have made that speech in a parallel universe. Nothing for struggling families facing Universal Credit cuts and soaring bills, nothing for businesses on the brink of bankruptcy and nothing for our nation’s carers. Totally out of touch.”

Ian Blackford, the Commons leader of the Scottish National Party, said in a statement: “For all the waffle and deflection, the prime minister cannot escape the fact that millions of families are poorer and worse off as a direct result of his government’s damaging policies.”

The ASI’s head of research Matthew Lesh said: “This was an agenda for levelling down to a centrally-planned, high-tax, low-productivity economy. Boris is hamstringing the labor market, raising taxes on a fragile recovery and shying away from meaningful planning reform.”

“Shortages and rising prices simply cannot be blustered away with rhetoric about migrants. It’s reprehensible and wrong to claim that migrants make us poorer,” Lesh said.

“‘Levelling-up’ so far consists of little more than listing regions and their local produce. Boris throws out impressive-sounding economic terms like ‘pareto-improvements’ to hid the fact that he lacks policies to drive growth,” he added.