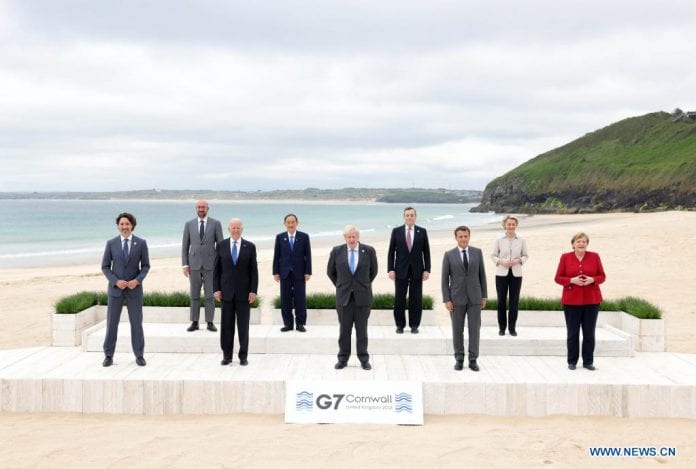 (Xinhua) — British Prime Minister Boris Johnson on Friday urged fellow leaders of the Group of Seven (G7) to tackle inequality and build back better from the coronavirus pandemic.

“What’s gone wrong with this pandemic, what risks being a lasting scar is, the inequalities that have been entrenched. We need to make sure that as we recover, we level up across our societies — we need to build back better,” Johnson said in his opening remarks at the main round-table discussions.

Leaders from Britain, the United States, Canada, Japan, Germany, France and Italy, plus the European Union, took part in the three-day gathering.

Economic recovery, COVID-19 vaccine sharing and climate change are expected to be high on the agenda during the meeting.

“It is vital that we don’t repeat the mistakes of the last great crisis, the last big economic recession of 2008 when the recovery was not uniform across all part of society,” he said.

Johnson has pledged Britain will donate more than 100 million COVID-19 vaccines to poorer countries in the next year, while U.S. President Joe Biden promised 500 million doses of vaccines to 92 low and middle-income countries and the African Union.

The G7 nations are expected to collectively agree to provide a billion doses of COVID-19 vaccine in an effort to end the pandemic in 2022.

The summit was held as multiple protests were carried out in the area, accusing the club of the rich countries of making “empty promises” and failed to properly tackle such issues as climate change and ecological emergency.

In Falmouth, one of the four designated areas for protests, demonstrators held high banners like “Liar”, “No Empty Promises” and “Resist G7”.

The G7 summit was also overshadowed by the newly exposed scandal of U.S. spying on European politicians and the Britain-EU dispute over Northern Ireland, among other issues.

Britain, which holds the rotating G7 presidency, also invited Australia, India, the Republic of Korea and South Africa as guest countries to this year’s meeting.